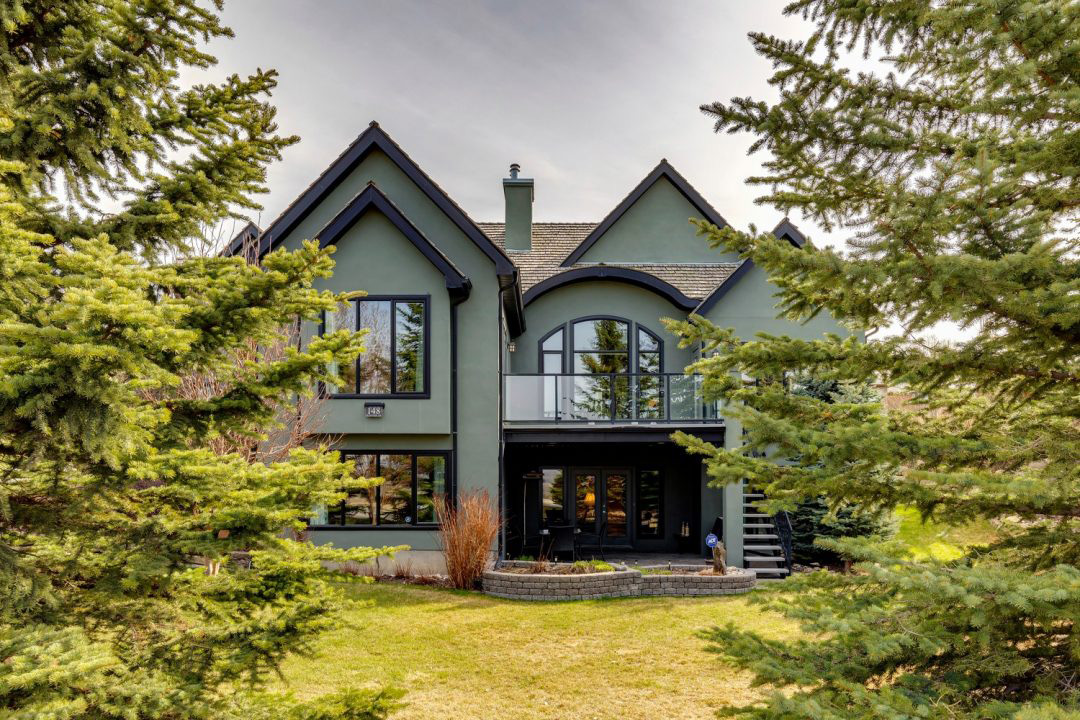 I was hired by Travis Munroe, an amazing realtor and project manager in Calgary Alberta, to do an occupied stage for a beautiful home in Slopeview – a community on Springbank Hill. This home was FULL of colour and perfectly set up to be a cozy, comfortable family home… but it did not show well for photos and potential buyers.

This project was a full 8 hour occupied stage during which we shopped the house and had movers help rearrange and remove furniture as needed. It was a wonderful team effort and went smoothly – leading to a sale in just a couple of days!

Upon entering the home you were greeted with a hit of pink and yellow in a grand entrance that led to a beautiful living room. Ahead was the giant windows that looked out over the mountains and needed to be featured. However, in order to showcase the windows, we had to first rearrange the furniture. As it currently stood, you walked into the back of two large chairs that blocked the view of the window from the entrance, and so those were moved to the window side as a grand sitting area, with the smaller chairs utilized in the bonus room loft (shown later in this project). There were also too many large pieces of furniture and electronics that were removed for photos and showings.

A blue area rug grounded the furniture and overall colour scheme, throw pillows were added to the couch and chairs for comfort, and more neutral decor and artwork were put up to help cool and compliment the walls – which could not be changed.

The heart of the home, and this one had a beautiful one. Travis had brought in a painter to paint the walls above the counters which really helped modernize the kitchen (it was yellow before) and with that we were able to tone down some of the accessories decorating it. This kitchen was flanked by a breakfast nook and a formal dining room which were both features of the home.

The breakfast nook has an older wooden table set that was slightly too small for the space. We made up with this by removing the glass top (which dated it) and bringing in 2 larger formal chairs from the formal dining room as head chairs so the nook felt more like ‘breakfast at tiffanys’ than an afterthought. I do not usually set tables but because this room needed more of a presence we did a full table setting with charger plates and centerpieces. I had the help of fellow stager Farhana (from Dazzle Staging) for a few hours and she rocked this.

The formal dining room didn’t see much change as it was a statement all on its own. We did however tidy and showcase the cart, and swap some artwork (the large piece in there was needed for the office – you will see why!). And the removal of those 2 white chairs helped this room as well.

The primary bedroom was very muted and yellow. Because of the quick turn around we did not have time to get any fresh bright bedding, but the homeowner did have a lovely white quilt we were able to use. I went with a ‘ski resort’ vibe in here and styled the bed with throw pillows and a coffee tray and throw blanket.

I also brought a corner chair over from the office (which helped the office too!), and changed some of the artwork to be less rustic and more neutral. And of course, I added a faux fur rug!

This room is probably my favourite transformation. It went from a very confused ‘college loft’ to a functional and welcoming ‘ladies tea’ space – or at least that is what I was calling it in my head.

It started as a task in floor planning. With the help of movers, we took the top part of the media center off and put it in storage, reusing the lower cabinet under the far wall window, which drew people’s eyes through the length of the room to the light, making it feel more bright and spacious. We brought 2 lovely chairs up from the main living room (as discussed earlier) and used them to balance the existing green couch. I had brought a round ottoman that fit perfectly in that awkward space where the TV used to be to complete a nice conversation circle and styled it with pillows and blankets. And lastly, we put a funky area rug under the ottoman on an angle to make it feel grounded and conversational.

I styled the room with tea sets, decor, and artwork, and found two beautiful complimentary plates in the basement bathroom which hung perfectly on the wall flanking the window – an awkward space for most art.

The homeowner admitted that it was where they stored the old furniture that she would be donating, but we were able to spruce it up and actually use 2 of the pieces quite seamlessly.

On the other side, although not pictured, we removed the desk ara and turned it into a workout spot, complete with water bottles and towels on a table in the second awkward space where the tree used to be.

That picture!!! Am I right?

I just absolutely fell in love with that huge mountain artwork that previously hung in the formal dining room and knew it needed to play a bigger role in this stage.

This office is my second favourite transformation and all it took was some rearranging. When staging a home office, I always try my hardest to get a CEO’s desk. What I mean by this is a desk that sits front and center and has a presence. The problem with these deks is cord management, especially when the client still lives and works there during showings. The homeowner’s desk was actually 2 separate pieces and so we were able to leave half against the wall (with all the cords) and still achieve the CEO desk in the center – and no CEO desk is complete without a beautiful area rug. This blue one and the blue in the artwork helped cool the yellow/orange walls.

All we removed was a large bookcase filled with CDs and a plushy armchair, which you may recognize from the bedroom. We hung artwork and styled with a few small green, black, and blue accessories.

The biggest change in the basement came from the area rug. Going from bright red to a more subdued brown and cream made the room feel less dark and daunting. We also moved the furniture closer to the TV so that when people came down the stairs the path to the patio felt more spacious and open. Other than that it was more about removing decor and art and going with a more minimal look.

That said, I would like to call attention to that amazing artwork the homeowner had of dogs at the stampede. That HAD to stay, and I brought down a console that was upstairs to put underneath it and give it purpose and placement.

The ‘antique room’ as the client called it, was just that – a room where she stored all of her antiques. It is pretty difficult to make an ‘antique room’ look modern, and so we didn’t even try. Instead, we leaned into it and simply lightened it up so the room overall felt brighter. We removed the heavy purple velvet curtains and red bedspread and found a spare comforter she had in a closet that was just a bit brighter.

We moved the vanity to the wall across from the bed so the mirror could help bounce light around, and didn’t become the focal point. I then styled the antiques around some modern pieces like a faux fur rug and removed some larger furniture.

Below are closeups of some of the details throughout the rooms. In occupied staging projects, these details are really the stars of the show and what evokes an emotional response from buyers.